A first version of UBIK is already running on the HoloLens®, enabling this exciting device with the full range of UBIK’s powerful feature set. Whether it’s the live values from your DCS system, the diagrams from your CAE software, the work package from the CMMS or some ERP data – everything that is consolidated by UBIK can be used in Mixed Reality and interact with the real world!

What was our motivation to take part in this year's Constantinus? A nomination, of course the prospect of a prize, but above all the conviction that we have achieved something outstanding for our customers. That's why we ventured to submit our successful...
Read More

Admittedly, the combination of UBIK® and Hololens® does not seem to be very reasonable at first glance. Especially because we promote solutions for industrial applications, that work even under the harshest conditions.  The HoloLens® is surely labelled...
Read More

​2020 came with many challenges, but despite the challenging situation we have not been shy to start new projects. One of them is "Common Access 2"! The aim of the project is to support small and medium-sized enterprises on their way to...
Read More 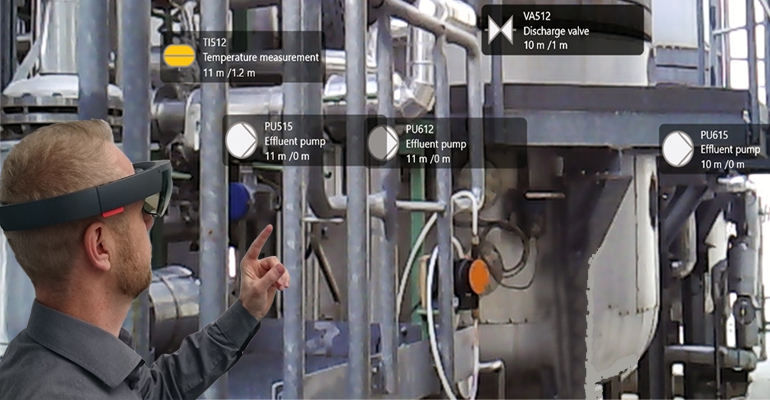 Admittedly, the combination of UBIK® and Hololens® does not seem to be very reasonable at first glance. Especially because we promote solutions for industrial applications, that work even under the harshest conditions.

The HoloLens® is surely labelled with many attributes these days, but industry-proof is hardly among them.

However, on a second glance, it looks a bit different. Firstly, there are areas or periods in the plant-lifecycle that don’t require special certifications such as ATEX etc., even in the process-industry,  which can be defined as our core-industry. Secondly, the past year also marked a broadening of our clientele  beyond the process-industry and today we also count companies from mechanical-engineering and automotive-supply-industries among our customers. And last but not least, we just recently switched our Windows client to the new Universal Windows platform (UWP), which is also the basis for Hololens applications.

It turned out that there are enough reasons to take a closer look at Hololens- and this is exactly what we started a few months ago. The first tests were quite impressive, especially the environmental mapping is to be emphasized. That’s already pretty nice on its own, but at the status quo there isn’t a real customer benefit. After all, everything the user can do (e.g. placing applications or holograms in the room) is designed to work within a very limited radius around him, and also tied to the WiFi router – let’s face it, neither the radii are restricted in our plants (actually its quite the opposite) nor can we rely on WiFi, because most of the time the user works completely offline.

But if one combines what the HoloLens can do well, namely tracking at close range, with the information UBIK already provides, a number of productive applications emerge immediately.

UBIK usually knows the complete data model of a system and often the objects within are already tagged with absolute position information (geo-data). UBIK objects and structures also have the profitable ability to hold an arbitrary amount of additional information, and that could also be the mapping information generated by the Hololens, the so-called Spaces.

Now, UBIK could take over the rough positioning on the Hololens, which is already done today through GPS/sensors or geographic markers. With this information, the Hololens will automatically be supplied with the respective relevant space and will therefore be able to fully exploit its strengths at close range. The result? The closer the user moves to his target object, the more accurate the tracking will be, just as it should be; and the positive side effect: the Hololens is suddenly fully offline-capable, because it takes advantage of all features of the UBIK platform.

How far away we are from that? Not far, stay tuned and be surprised!

To showcase the full scope of the existing UBIK/SAP-Integration, Augmensys and its neighbor at the Lakeside Park, addIT/Atos, just recently integrated a full SAP-demo-system into the UBIK Demo Plant. The used SAP system already leverages the newest...
Read More

Roles in the digitisation of small and medium-sized production companies. A pragmatic approach to practice, benefits and strategies. The terms "Industry 4.0" and "Internet of Things" are used to describe visions of the future that promise comprehensive...
Read More

Congress Production of the future

"Augmented Reality as on step to Industry 4.0" - this is the title Helmut Guggenbichler will use to launch the Production of the future Congress on 6 April 2016. If you want to know more about "Preventative maintenance with Augmented Reality Navigation" you can...
Read More