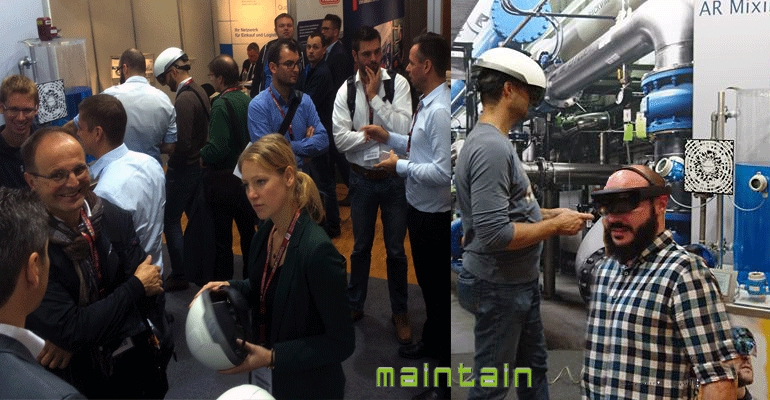 This year, the main focus was on Augmented Reality.

For this reason, CEO Helmut Guggenbichler was invited to present Augmensys and UBIK® – during a forum – to a very well attended auditorium. The topic of his presentation was “Preventive/Predictive maintenance with AR, OCR and iBeacons – Feature battle or seminal maintenance methods”.

Visitor-magnets at our booth were the prototype of Microsoft’s HoloLens, which makes the future applications of the Augmented and Virtual Reality “visible”, and a small-scale plant model of our partner Actemium, which could be controlled using Daqri’s AR-Helmet.

The fair was a great success for us, as many new contacts were made and lively discussions were held.

Exploring new horizons! Find our new Video on: https://www.youtube.com/watch?v=gT-KN1aj6I4 A first version of UBIK is already running on the HoloLens®, enabling this exciting device with the full range of UBIK's powerful feature set. Whether it's the...
Read More

With the upcoming release of UBIK® 2.4 we are very happy to announce that we will also release the first version of the brand-new UBIK® OPC UA (Unified Architecture) interface! Now you will be able to connect UBIK® to any DCS/SCADA system that supports...
Read More

The maintenance forum has been THE networking platform in the maintenance sector for more than 30 years. In the dialogue between practice and science, current and future topics of maintenance are always addressed in order to provide new impetus. In the 17th...
Read More