The importance of Augmented Reality in industrial solutions 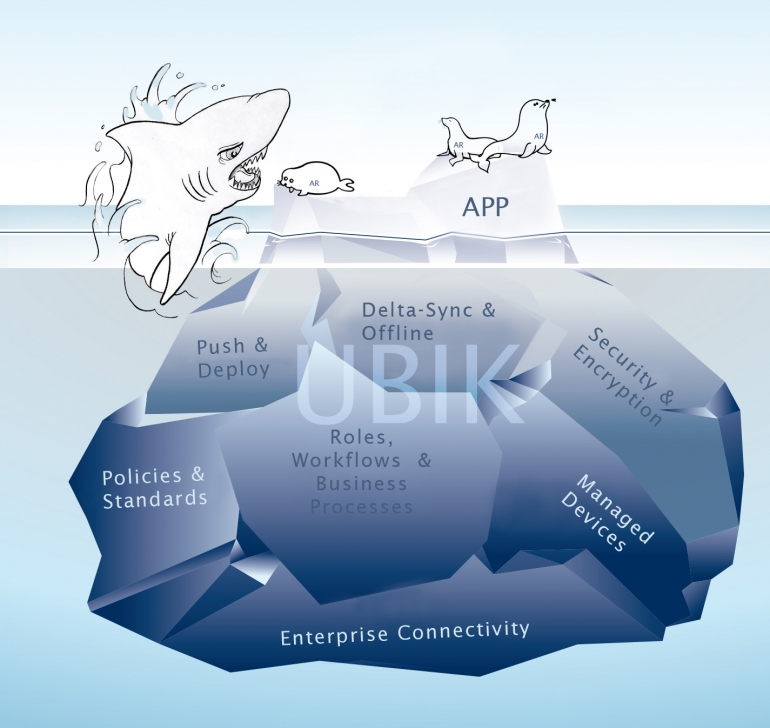 First, there was an idea: use Augmented Reality. The idea quickly turned into a concrete project with only one thing missing, the appropriate toolbox. With management backup and a low-cost SDK in the pocket, everything was set to build a nice App with great effects, nothing could stop the project team anymore in being creative. The reason why there was no maintenance contract offered was never questioned, because the great anticipation of an application, which was going to impress the management, but even more the opportunity to simplify complex work processes with cool new technology was stronger than the desire to care too much about details.
Then, after a successfully displayed project and countless invested working hours – always the new App in mind – the bad news: the license provider was acquired by a global tech giant. There will be no further releases of the SDK, because the new owner is not interested in a business model of this kind. For many projects this means “it´s over!” and for many project leaders the guessing starts. How shall we continue?

When the seal jumps off the tip

Scenarios like that happened to many industry customers of a popular SDK provider, after a well-known global tech giant bought it. Every working hour and a lot of money is suddenly gone. Without any warning and with the situation that there is no official way to get direct support anymore from the former cool and modern company. Anyone who has not thought about sustainability, who put AR in the center of the project, is forced to start all over. All the companies who have built their application around the purchased SDK are in trouble now. Industrial solutions and, more common, those on the verge of becoming such one day, are stuck in a dead end.

Augmensys has seen AR always from an industrial perspective and therefore our software solution UBIK® was developed and built with a clear focus on sustainability. Losing an AR technology provider is for our customers nothing more than a “seal that jumped off the iceberg”. Because in our world AR is a valuable part of what we do, but not the center, and therefore loosely coupled to an industrial mobile solution that sits mainly underneath the surface, steering and supporting mobile software and hardware – quite comparable to an Iceberg. So with UBIK® the App is only the tip that sticks out of the water and AR can be compared to a seal that gives this tip some additional features. The basis of UBIK®, the huge part of the iceberg under the water, is bigger, more powerful and for the value of the whole solution way more important. Or, in other words: the iceberg doesn´t care at all if a seal is sleeping on its tip, and it cares even less how it is named.

Of course, there is still the possibility for customers to simply exchange/replace the SDK with another SDK. But they should always bear in mind that the main benefit of AR lies in supporting usability, because it can build a powerful bridge between user and content. Bridges connect things that were formerly separated, in real life you would never start with the bridge and then build the landscape around the two ends, like “Hey, I just found a nice-looking bridge, let’s see where in the world we can put it!”. For a productive solution, it is first and foremost important to deal with the company’s data asset and how these data are provided, maybe supported by Augmented Reality features, maybe not, but never vice versa. Metaphorically spoken it is not a good idea to take the iceberg out of the water and turn it upside down, this would certainly not lead to a stable solution (and obviously crush the seal to death).

Knowing the core of your demand

We always start with defining the use cases together with our customer, then we consider the core needs and only then we are leveraging different features and tools to fulfill our customer’s whishes in the most reasonable and intuitive way. AR is just one of these tools, albeit of course  with a huge potential for the future. That’s why we use various AR technologies throughout our projects, from our own development for Windows 8 and 10, up to commercial SDK’s and libraries; but for us, there is always one common denominator: they have to be exchangeable, because today AR is driven by the highly dynamic consumer market and, being an Industry provider with a long-term focus, we clearly don´t want to swim in that current.

Now, a critical mind could be tempted to ask: „What happens if Augmensys is sold, too? “ “Nothing” would be the answer, because Augmensys is on the one hand providing a certain level of security together with its maintenance contracts, and on the other hand is UBIK® completely accessible for everybody, starting from the interfaces and API´s, over to the application and documentation. Furthermore, we operate in an environment, which is relatively far away from the totally overheated acting consumer market and its current App hype.

So an AR-SDK might be the right center technology for a temporary marketing campaign that results in a disposable App – therefore it’s not surprising that marketing is where most of the current SDK providers are coming from. We believe that it needs industry Knowhow and industrial technology to tackle industrial challenges – maybe not as shiny and polished as in marketing, but by all means functioning in real life.

What was our motivation to take part in this year's Constantinus? A nomination, of course the prospect of a prize, but above all the conviction that we have achieved something outstanding for our customers. That's why we ventured to submit our successful...
Read More

The Fraunhofer Institute for Material Flow and Logistics IML and the Chair of Corporate Logistics of the TU Dortmund are organizing a practical workshop on Augmented Maintenance on 09.11.2017. Augmensys were brought on board by the Fraunhofer IML to provide...
Read More

Two years after the participation of Vinci Energies in Augmensys GmbH, a new cooperation is now looming. The subsidiary Actemium Deutschland takes over the service business of Augemensys Deutschland GmbH in order to gain direct access to the expertise of...
Read More

How networked data management works in everyday life will be demonstrated with practical examples on 18 January 2016 from 5 p.m. in the Lakeside Park. Helmut Guggenbichler, CEO Augmensys GmbH, talks about Mobile Data Management with Augmented Reality - From...
Read More